HOLBEIN: Capturing Character was edited primarily by Dr. Anne Woolett. Her collaborator’s include: Ulrich Hans Birkmaier, Austėia Mackelaitė, Peter van der Coelen, and John T. Qillen. This work is a comprehensive monograph of the work of Hans Holbein The Younger (1497/98–1543). This compact Gallery Book was published to accompany the exhibition of the 16th Century renaissance Master Hans Holbein The Younger. The exhibitions at the J. Paul Getty Centre on October 19, 2021, – January 9, 2022; and continuing at the Morgan Library & Museum from February 11, 2022, to May 15, 2022.

Anne Woolett and her associates have produced a invaluable asset for anyone who wants to study Holbein or those who simply enjoy his amazing talents.

Each listing is individually numbered and contains essential details relating to the image containing information on:

Hans Holbein was an artist with unsurpassed levels of observation and the ability to translate his vision to oil on panel or many other mediums.

Additional information included in the book are:

1(a method originally accredited to Leonardo da Vinci. It involved tempera and oil, called tempera grassa, to try and extend the limitations of the medium. He would use one part egg yolk mixed with one part linseed oil to form the binder for his pigments.)

The plates in this work are exquisite in their reproduction being large, high quality, full-color images of the Master’s works. They are accompanied by comprehensive pertinent details relating to each work of art. The Editor and her collaborators excelled at the presentation, format, and underpinned these with exquisite insights to the zeitgeist of the times.

Holbein: Capturing Character is a catalogue that is engaging, entertaining, informative and an accomplished illumination worthy of the Great Master. The subject is handled masterfully and is impeccably researched. There are extensive and detailed notes for each chapter, and in addition a short comprehensive Bibliography. Holbein: Capturing Character proved to be an addictive read.

It is often said that a thing of beauty is a joy forever and so it is for this pocket-sized library of perfection.

I would like to thank Editor Dr. Anne Woolett, et al. , J. Paul Getty Museum, and NetGalley for affording me the opportunity to review HOLBIEN: Capturing Character. 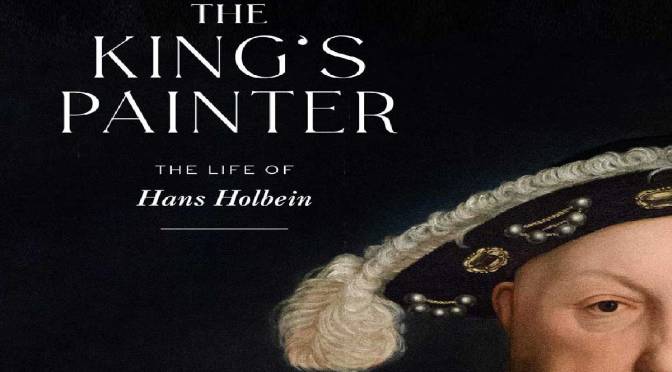 Franny Moyle is the author of The King’s Painter. She is a Cambridge educated art historian and biographer.

The King’s Painter: The Life of Hans Holbein written by Franny Moyle is a long-awaited full biography of the great German Artisan. Moyle presents her research and analysis into his life, times and work. Moyle posits that Holbein was arguably the greatest renaissance Master painter in Northern Europe with a wide repertoire during the 1530’s until his death. Holbein was exalted by his peers as comparable to the German artist Albright Dürer and indeed there are some similarities in their style of painting. Nicholas Bourbon compared him to Apelles of Kos. Others have described him as a multifaceted genius, humanist, political propagandist and a satirist. A man who’s deft work consisted of loosely concealed symbolism and allusion, hidden in plain sight. Moyle’s focuses upon the period of Holbein’s life from the 1520s until his death and the administration of his will.

The King’s Painter begins with the unique and close relationships that Hans Holbein enjoyed with King Henry Vlll of England. Holbein is at the height of his power, and his talent was known around Northern Europe. He was arguably the most notable painter in Europe during the Reformation and the Dissolution of the Monasteries in England.

The book begins in the 1530s; Holbein was an exalted artist enjoying the fruits of his labors. He had a wealthy clientele, fame and riches; all forged on his talent of creating realistic likenesses for his patrons. Such was his success that he was one of the few who could engage with King Henry Vlll in private, a very rare honor indeed.

The gravitas of Holbein’s fame as Northern Europe’s most heralded painter comes into stark contrast when one considers his contemporaries. His peers during the period were: Leonardo da Vinci who was working in France at the time; Michelangelo who was painting the Sistine Chapel for Pope Paul lll; and the Venetian artist Titian da Cadore, also know as Tiziano Vecelli,, who was creating work for King Charles V The Holy Roman Emperor and Archduke of Austria.

Hans Holbein the Younger worked during some of the most tumultuous times in history. Times that were resplendent with great artists. His work was held in the highest esteem due to the verisimilitude of his portraits. He was respected and valued by the political elite, religious, and other connoisseurs.

It is difficult for us to imagine today just how popular Holbein’s art was during the late 16th Century’s European Renaissance period. When he released a new work, there was a frisson of excitement so powerful it was palpable. Holbein’s projects were considered to be a luxury. At a time before modern photographic processes, his paintings were seen as a way of passing down your visage to history and your decedents. At no time since Apelles had an artist been so able to depict his subjects with unfettered verismo.

By the end of Holbein’s life, he had accrued wealth and notoriety. Moyles posited that his sad demise was due to the plague. However, the absence of an identifiable resting place or his remains leave us with an enduring mystery.

The King’s Painter is a detailed history of 16th Century England, the Monarch Henry VIII and a testimony to the verisimilitude of the portraits painted by Holbein. Moyles book will be popular with those interested in; Hans Holbein the Younger, art history and those who wish to understand Holbein’s work through the context of his life and times. The King’s Painter is an authoritative dive into Hans Holbein’s past. It enlightens those of us who are fortunate to still enjoy the great artists work today.

The King’s Painter is not a gallery book filled with images of either the artist or his works. Instead, Moyle has produced an academic examination of Hans Holbein, his associations and challenges. Moyles writing is exceptional and she maintains the readers attention with her deft narrative.

The King’s Painter is engaging, entertaining, informative and accomplished. The subject is handled masterfully and is impeccably researched. There are extensive and detailed Notes for each chapter and in addition a short, Selected Bibliography. The King’s Painter proved to be an addictive read.

I would like to thank Franny Moyle, Abrams Press, and NetGalley for affording me the opportunity to review The King’s Painter: The Life of Hans Holbein.

OTHER BOOKS BY THIS AUTHOR

Well hello again! Thank you for visiting us here at Litercurious. We appreciate your patronage and look forward to providing you with the best experience possible on each and every visit. Feel free to suggest any books you would like reviewed through our contact link. We look forward to you next visit. Feel free to share our posts on social media.

Some of Our Community Thank You

Audio & Book Reviews Site. Why watch when you can read?